View my complete profile
If we persist, I do not doubt that by age 96 or so we will all have gardens we are pleased with, more or less. -Henry Mitchell

Now Open at Our New Location

Leave Me Alone, I'm Digging is now up at a new location. Click here to keep updated on what's going on in my garden. The site is still under construction, so look for new additions in coming weeks.
Posted by David at 9:35 AM 5 comments:

I wish I had a really good reason for taking a break from blogging for a while, like tracking the Ivory-Billed Woodpecker or winning the starting point-guard position at Carolina, but I don't. Although I haven't been writing about gardening, I have been getting my hands dirty, which I suppose is better than the reverse.

My front flowerbed occupies a square of real estate in the corner formed by the driveway and front walk. Two dogwoods keep the back section in deep shade throughout the growing season, and it is here that my hellebores, hostas, lungworts, astilbes, and foamflowers exist in what is essentially a tiny patch of forest. The front part of the bed, however, faces southeast, so that the outer edge is in the sun all day, creating a desert-like habitat that once fried a creeping phlox. (My mother was astounded to hear this, observing that phlox can grow on a sidewalk...maybe so, but not during the hellish summer of 2007.) The in-between area varies from part sun to part shade, depending on the angle of the sun in the sky.

This is also the most visible part of the yard. You see it from the street, we walk by it on our way to the front door, and it is what we see from the big windows in the living room, where I sit with my cat Casey and drink my tea in the morning. Last year it looked lovely in April and May, but rather nondescript the rest of the year, so I wanted to give this bed some year-round interest.

I found a December-blooming camellia in the back yard that had done poorly in two locations, so I hauled it up to the front yard and combined it with a deciduous azalea, ("Swamp Azalea" as it's called in South Carolina).

I added some Epimedium, a few dozen daffodils, and a Dwarf Hinoki Cypress and a collection of various heucheras. Then I rearranged the gumpo azaleas and some of the hellebores into a clump surrounding the birdbath.

A few days later, I noticed what looked like hostas coming up in the middle of the gumpos and struggling to get out from under the concrete birdbath. "Now that's weird," I thought. "Hostas don't come up in October."

When I was in college, our campus newspaper, the Daily Tar Heel, always did an April Fool edition on April 1, filled with ridiculously impossible news stories. Things like America electing an African-American President, or the UNC football team having a winning season. So imagine my surprise when I opened the paper the other day and saw that Butch Davis, the UNC football coach, was having to deny rumors that he was being courted for the job at Tennessee....Nobody ever wants any of our coaches. So then I see on the front page that Barack Obama has won the election, including NC, and I figure it's gotta be April Fool's Day. I mean, come on. The learned governor of Alaska herself said that North Carolina was one of the "pro-American parts of the country..."

But if it's April Fool's Day, then what's that junco doing scratching around among the fallen leaves? And why are there two white-throated sparrows sitting on my fence? Those are November birds. You don't suppose that newspaper was real, do you? President Obama, okay, but Carolina ranked #17 with a 7-2 record???
Posted by David at 9:21 AM 8 comments:

Talking With a Snake in the Garden

I was working in the garden in the cool of the evening when a voice spoke to me.

"Hey, watch it with that pitchfork, chief."

I looked down and saw a little brown snake on the ground.

"Hmmm. Talking snake...garden....I don't like where this is leading." 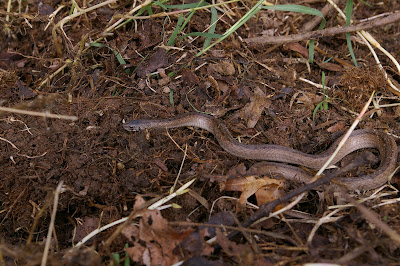 "Very funny," replied the snake. "Do you know how much trouble that story has caused for my kind over the centuries? People see me and freak out. Then they go get a hoe and try to chop my head off. Trust me, there's a lot of evil in the world, but snakes aren't the cause of it."

"Sorry, my little friend. I was only kidding. You're welcome in my garden. I didn't mean to frighten you with the pitchfork. I was just moving some compost. You know, you're the first snake I've seen in my garden. I wondered if I was doing something wrong."

"Oh yeah. You guys are cool. Admittedly I'm more fond of nonvenomous types like you than I am of Copperheads, but yeah, snakes are awesome."

"Boy, that's a new one. I usually hate encountering humans."

"I know what you mean. I try to limit my dealings with them too. That's why I come out here."

I sat on the ground beside the snake. For a while, we were silent, just watching the birds and late summer butterflies.

"You write a blog, don't you?" the snake asked.

"I must say that you're a very well-informed snake. I'll bet there are some political candidates who don't know what a blog is."

"That's another thing. Why do people refer to slimy politicians as "snakes?" WE aren't slimy."

"Forgive me. I was asking about your blog. I expect that many of your readers are not as snake-tolerant as yourself."

"Well, could you put in a good word for snakes on your next post? At least for Brown Snakes. We're harmless to humans. I mean look at me. I'm 8 inches long, I have no fangs, and I eat insects and slugs. There's no need to go all crazy and start chopping at me. Really, all I want is to be left alone. Could you put that in there?"

"My blog is all about being left alone in the garden. Consider it done."
Posted by David at 10:09 PM 14 comments:

How Many Times Can I Rearrange the Shade Garden?

The shade garden by my front walk has been bothering me ever since the last time I rearranged it. There were too many gaps, especially in winter. This is a bed that has to look good twelve months of the year, because it's at the front of the house and I walk right past it on the way to and from the front door. Lately, every time I've walked past, I said, "I need to do something about this bed."

The main problem was that the gumpo azaleas are shorter than the hellebores, and you couldn't see them, so I pulled all of the azaleas to the edge of the bed, moved the birdbath, leaving the hellebores further back. Behind them are the taller bear-claw hellebores, then a camellia which hasn't done well anywhere else in the yard, so I'm trying it here. 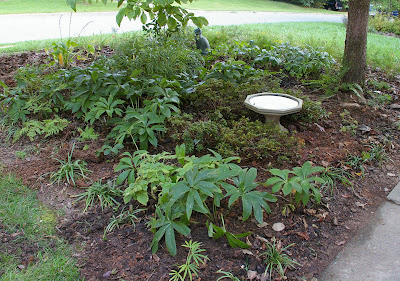 Because I consolidated the hellebores which were scattered all over the bed, I now have a big empty space that I need to fill. I'd like to try some new plants, and I'm open to suggestions for what might look good here. I'd like something that is drought tolerant, and that can handle the dry shade beneath dogwoods. (It's full/partial shade except winter and early spring.) Here's a list of some plants I'm considering. If you've had experience, good or bad, with these, please let me know...or if you have other suggestions. Mostly I want short plants, 1-2 feet tall. Thanks in advance! 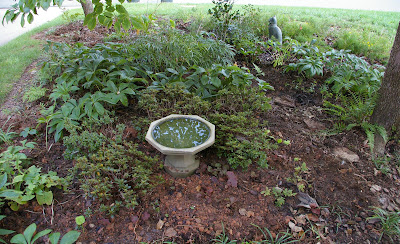 "You haven't updated your blog lately, have you?" Sandra asked. We were at our brand new Wild Birds Unlimited store, getting ready for the Labor Day opening.

"No, sometimes you just run out of stuff to write about. I griped about the drought all last year, so I thought about just running the same posts again and changing the date, but somehow that seemed intellectually dishonest."

"Well, you can't write about that now."

I'll say. The remnants of Hurricane Fay came to Greensboro yesterday and drenched...and I mean drenched...the city. 6.6" of rain at my house, most of it in less than 24 hours.

So that's the news from my garden. I've got some other stuff going on, a few rootings, still working on my new flowerbed, but I'll get to all that later on. College football starts tonight on ESPN, so I gotta go.

Oh, wait...I have to show you the most recent visitor to my garden: 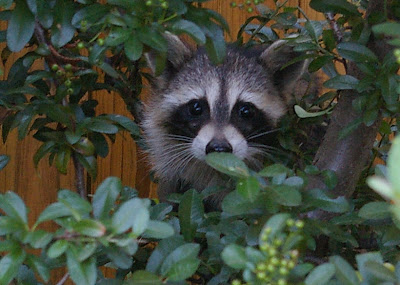 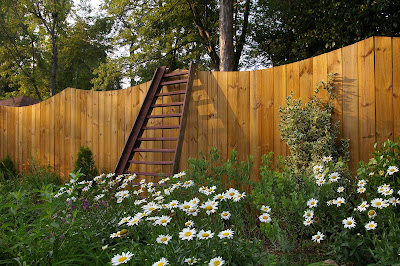 A climbing rose has appeared in my garden, likely planted by the garden gnomes, since I have no recollection of planting it, and I was thinking how grand it would be to have a sturdy trellis for it to climb. I have some scraps of cedar wood that would make a fine trellis, if I ever took the initiative to put them together. They have been under my deck for nearly three years, however, because I dislike any project involving tools that do not go into dirt, as well as anything requiring nails and screws.

Fortunately, as I was walking around the neighborhood one Sunday evening, I discovered this deck railing on someone's trash pile. I considered returning home for my car, but I feared that another scavenger might happen along and realize its value, so I hoisted the thing onto my shoulder and made my way back home, looking like some bizarre performance artist.

Which made me wonder...since my carbon offset scheme...er...program went nowhere, perhaps I could apply for an artist's grant. I'll call it a sculpture, and use words like "oevre," "verticality," "ontological" "juxtapose," and "paradigm" in my artist's statement.

So what do you think of my piece? (Real artists just say "piece," which is short for "piece of scrap lumber I found on the side of the road." If you work in academia you know these things.) Is it a commentary on bourgeoisie striving, symbolized by a ladder leading nowhere? Or a subtle evocation of Jacob's ladder, probing the man-God dialectic in ancient Hebrew thought? (I gotta stop--this is like shooting fish in a barrel. I knew I should have finished grad school!)
Posted by David at 9:37 PM 14 comments: